I would have to consider myself a pretty selfish sewist. I rarely ever sew for others. Sometimes it's because I'm lazy, but mostly it's because I hate that others might look at my work and go "ugh". Which is ridiculous,since the majority of the population can't sew a button on, let alone sew an entire garment. But this Halloween, I was cajoled into making a costume for a friend's daughter. Of course, it wasn't easy for her, but I couldn't say no after she threatened; "if you don't make her a little red riding hood costume, I will have to put her in an adult costume." Of course the first thought that flew through my mind was an inappropriately sexy costume on a tween. Now, I am totally fine with the sexy costume, snort, I've been known to cavort about town in one around Halloween, but I'm also not 12. So I gave in. As I was in the fabric store, cursing all the different fabrics I was having to carry around (I said I was lazy right?) A woman, about 30ish, squealed with delight to her friends "YES, that's what I'll be! I'll be sexy little red riding hood! HOT!" Ooooooh the irony! And yes, both the woman cutting my fabric and myself just about peed our pants with laughter. After a few days of sewing, the outfit was ready and then worn to a country club costume contest...where she WON!! That's right, we won an award! Ok I will admit, this is about 80% due to her cuteness factor, and 20% due to my sewing ability, but I'll take it! (I wonder if that means I get 20% of the enormous chocolate bar she won...mmm...chocolate) Tell me she isn't cute people...look at that victory shot! 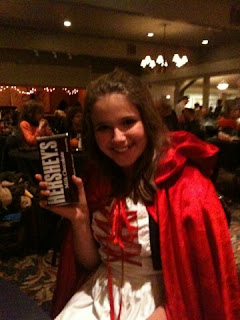 As a thank you and payment for said costume, Mom funded $300 to our project on kickstarter! Yeah Mom!!
So what does $300 get us you ask? Well it gets her; a free group sewing lesson, personalized sewing labels, a Made T-shirt, bag and free club membership for a year. But it gets Made two brand spankin' new cutting table! I know it doesn't seem like much, but every little counts on our way to a huge sewing mecca called Made Studios. So Stop by our project, friend us on facebook, tweet us on twitter, and send our name and site to everyone you know!